Finally got our pens to write about how we celebrated the fifth anniversary of the company.... Of course, it had to happen on a large scale, in the richest country in the world, which affects their rapid development and incredible buildings. I'm sure many have thought about UAE, but no, we've been before. This time we all went to Qatar. What was it like for – read on:) 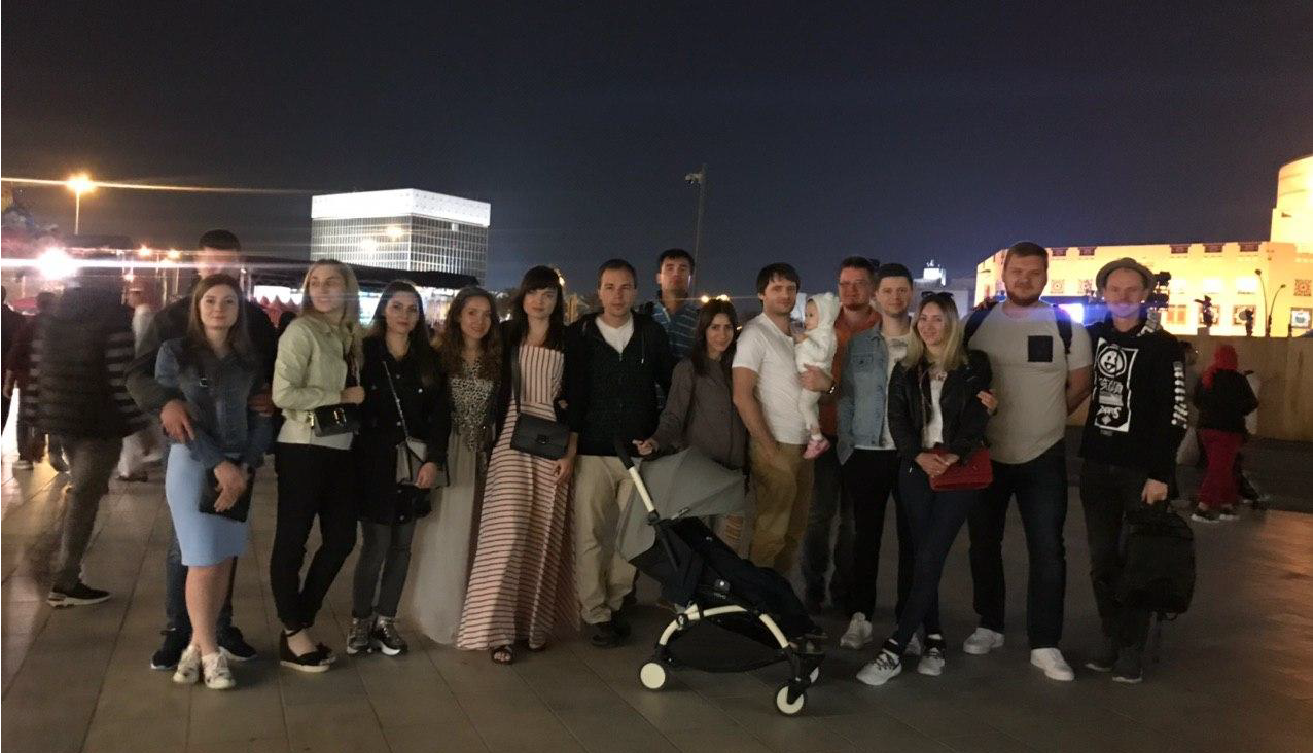 Assume that it would be correct to start the story with a brief background on the country itself. Qatar located on the Eastern coast of the Arabian Peninsula, in the heart of the Persian Gulf, that is close to major oil fields. Thanks to these natural resources the country has got the opportunity to develop. The population of about 2.6 million, are Muslims. And another facts is that in the country the prohibition of alcohol, so if you have the desire to pamper yourself a bit you can do exclusively on-site. 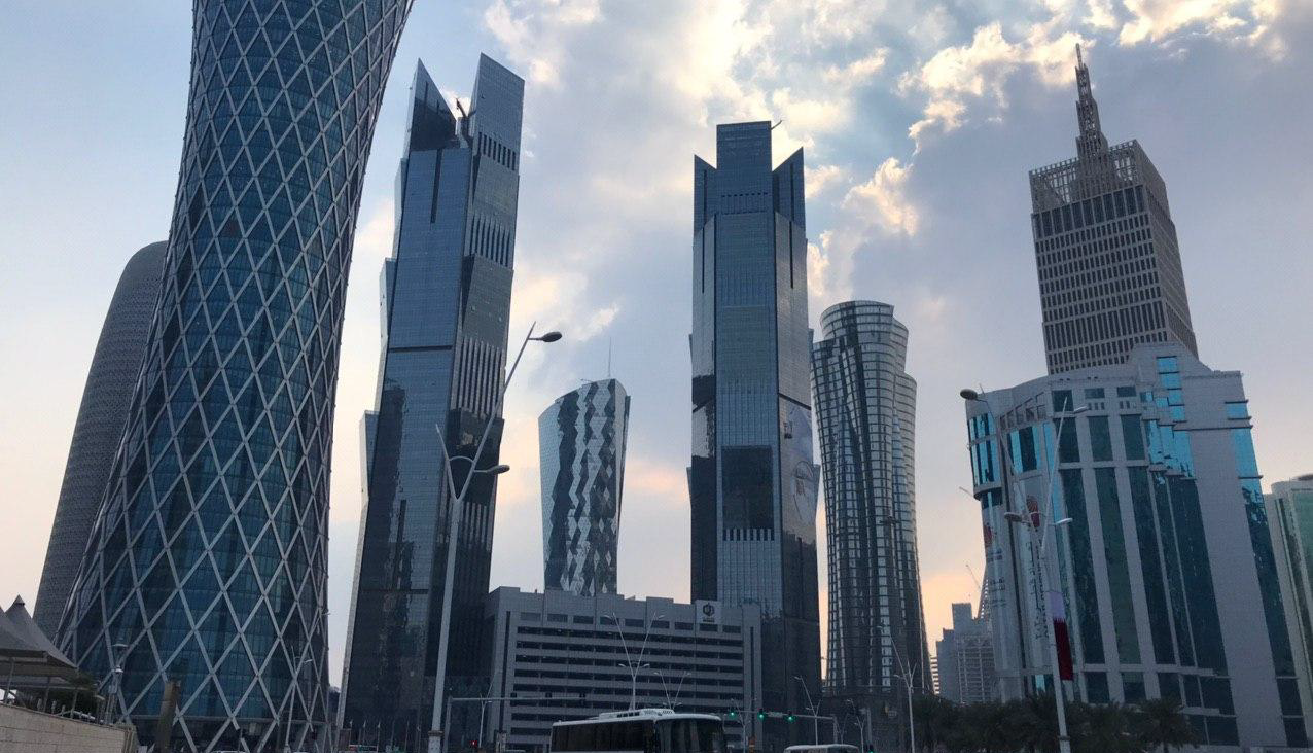 Of course the city of our stay in Qatar Doha - capital, which surprises with its modern architecture. Our first place of visit was the national Museum, also called "desert rose", a project of the Pritzker prize winner Jean Nouvel. The building is a maze of curved discs and arches and it is divided into three parts: "beginning", "life in Qatar" and "modern history of Qatar." The Museum we liked it so much that we visited twice in the evening and in the daytime. 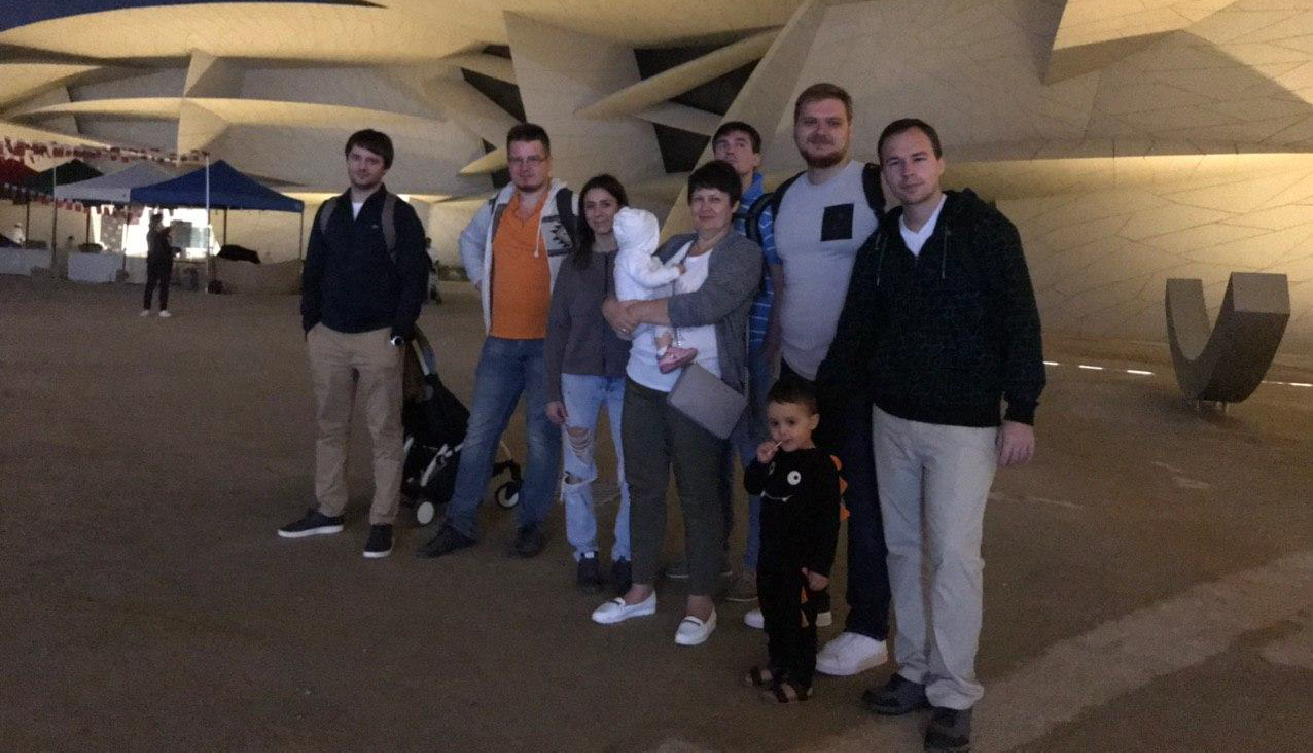 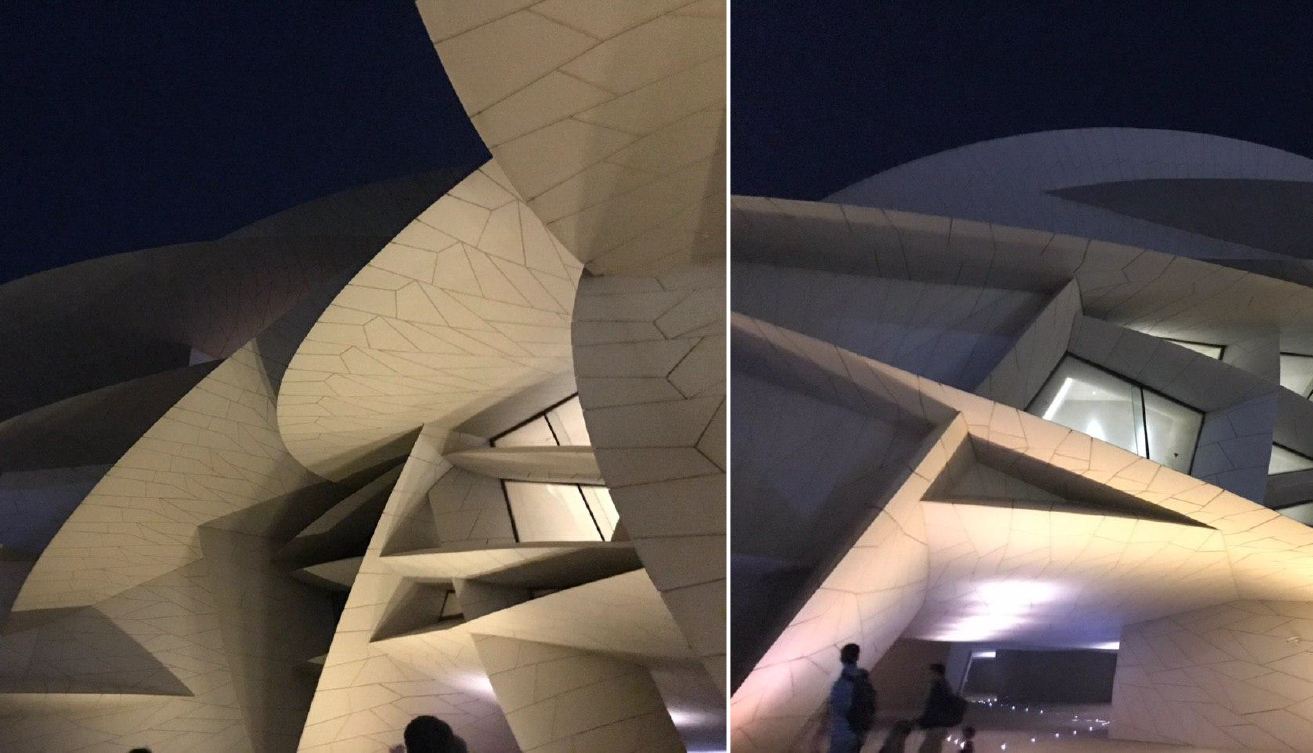 And next we visited the Khalifa stadium and not only walk on it, but went on the Liverpool – Flamengo, I think that football fans are now jealous of us, because it is also one of the 8 stadiums which will host matches of the world Cup 2022 football. Cool, right? Originally a sports facility was constructed in 1976, and in 2017 he was again open to the public after three years of reconstruction. Great and incredible, with a capacity of more than 40,000 people.


Next, we decided to scout the area just North of Doha and got to Mangrove fields is a very unusual and unique place. This green oasis in the desert country forms its own ecosystem and is home to many resident and migratory birds, for example, such as herons and flamingos. 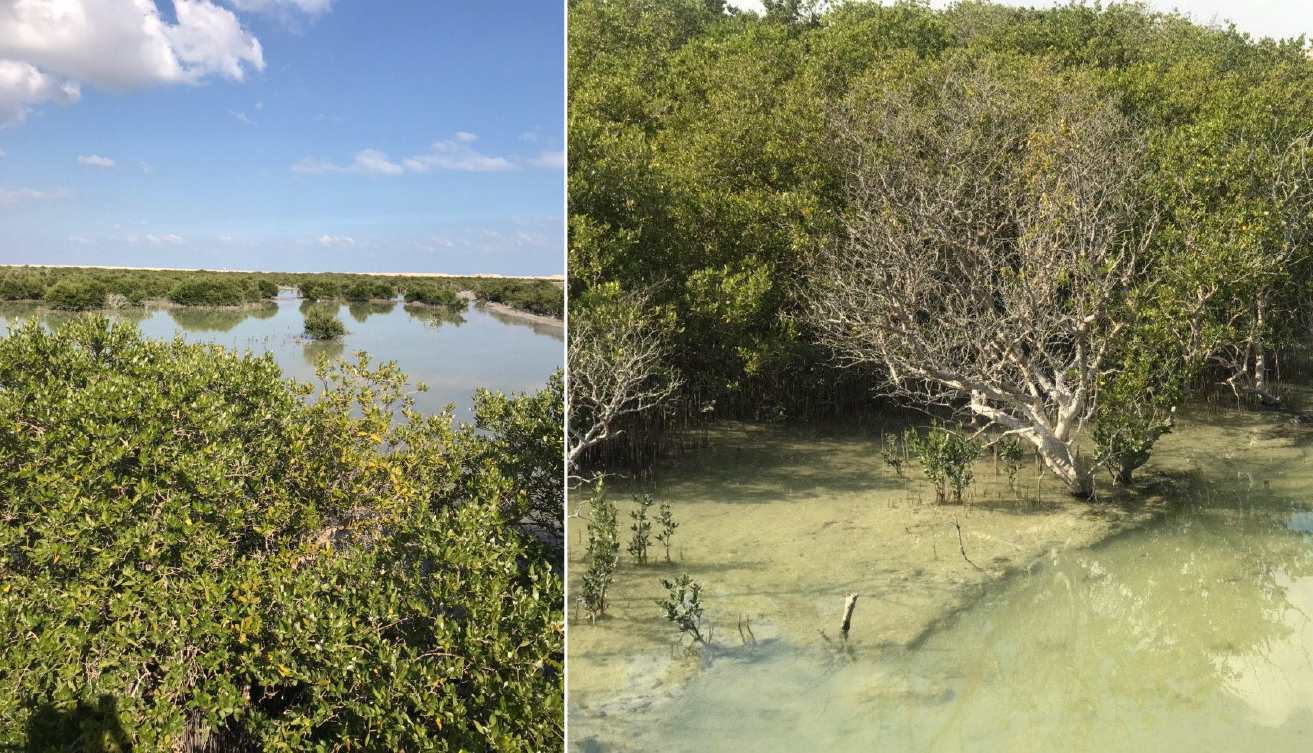 The Qatari government is investing large sums of money in the educational sphere, so there are a Doha Education city!!! There are both universities and the library, which was designed by the architectural Bureau of REM Koolhaas OMA, and even the futuristic mosque under the project of Zaha Hadid. 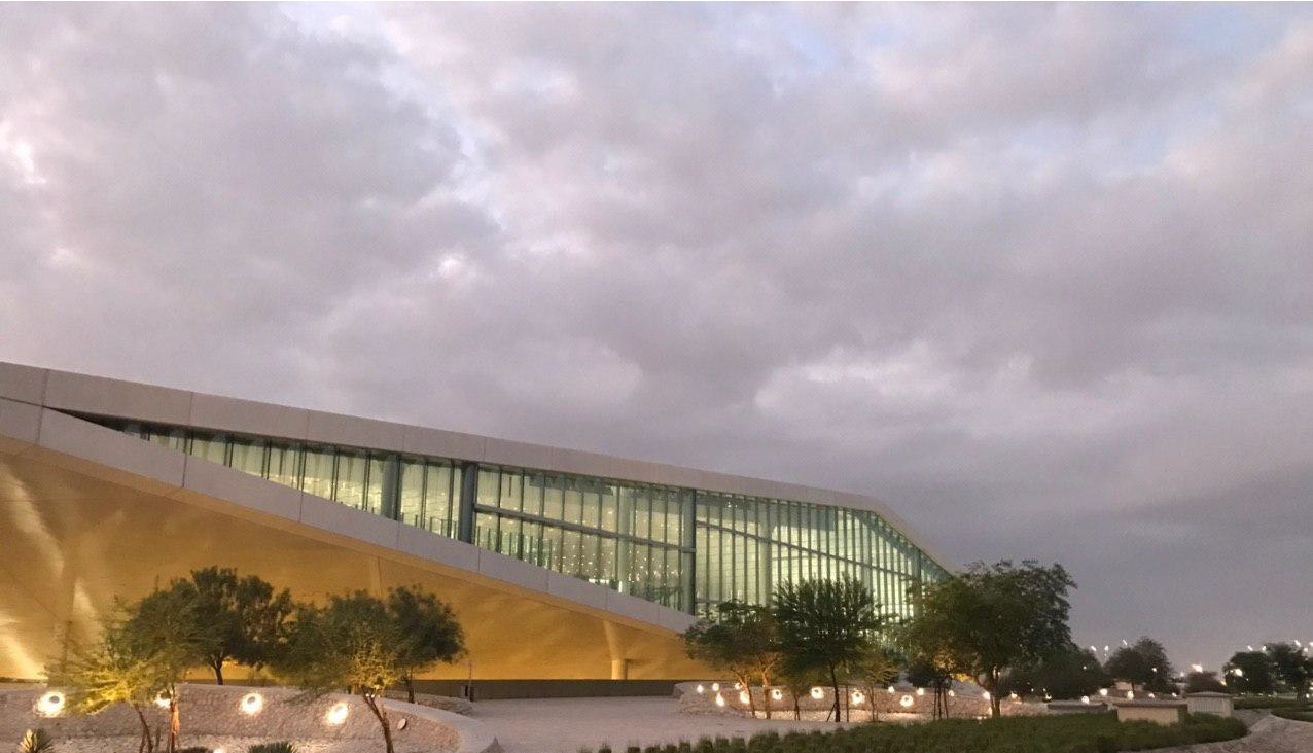 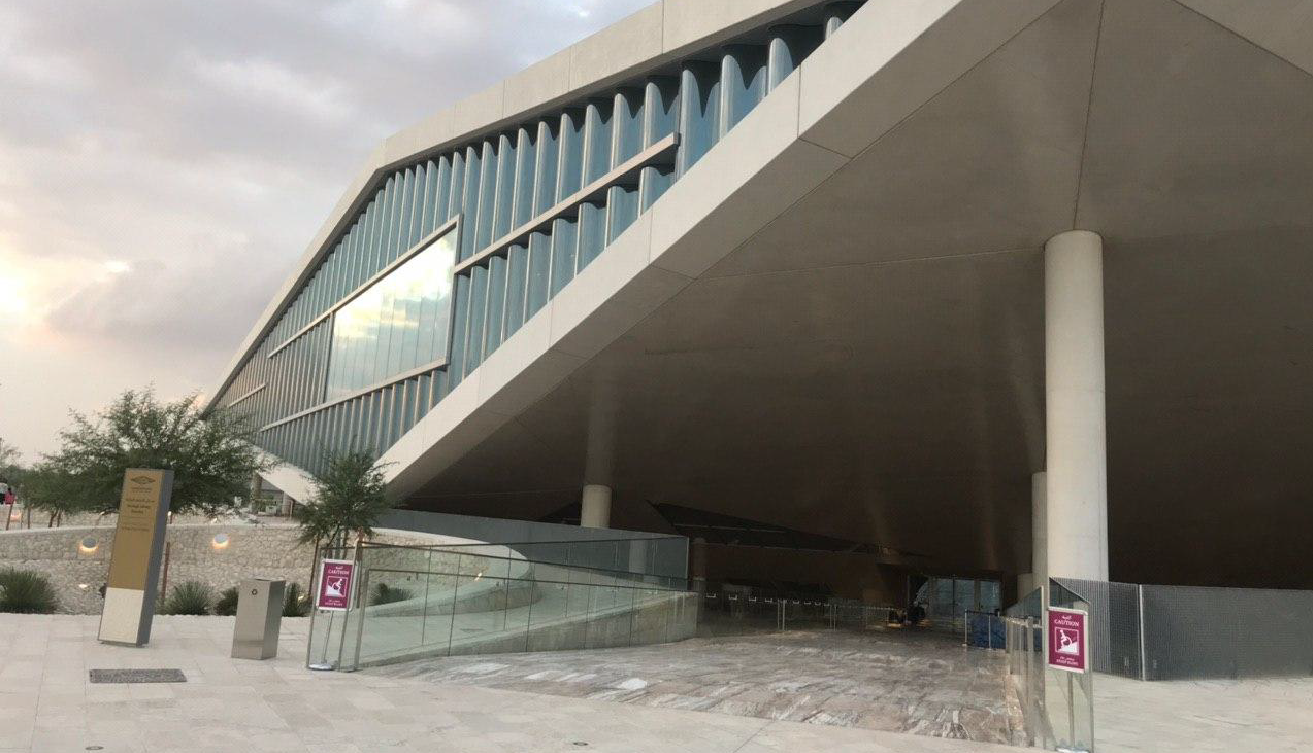 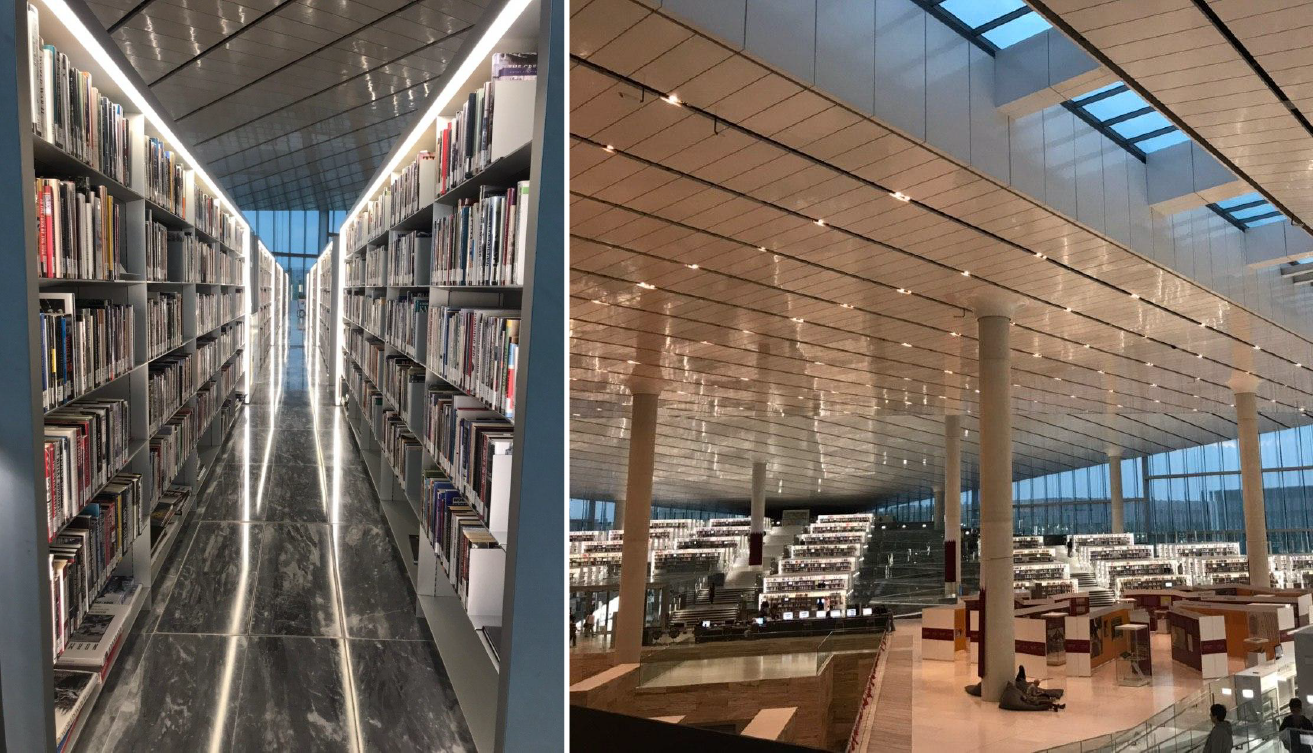 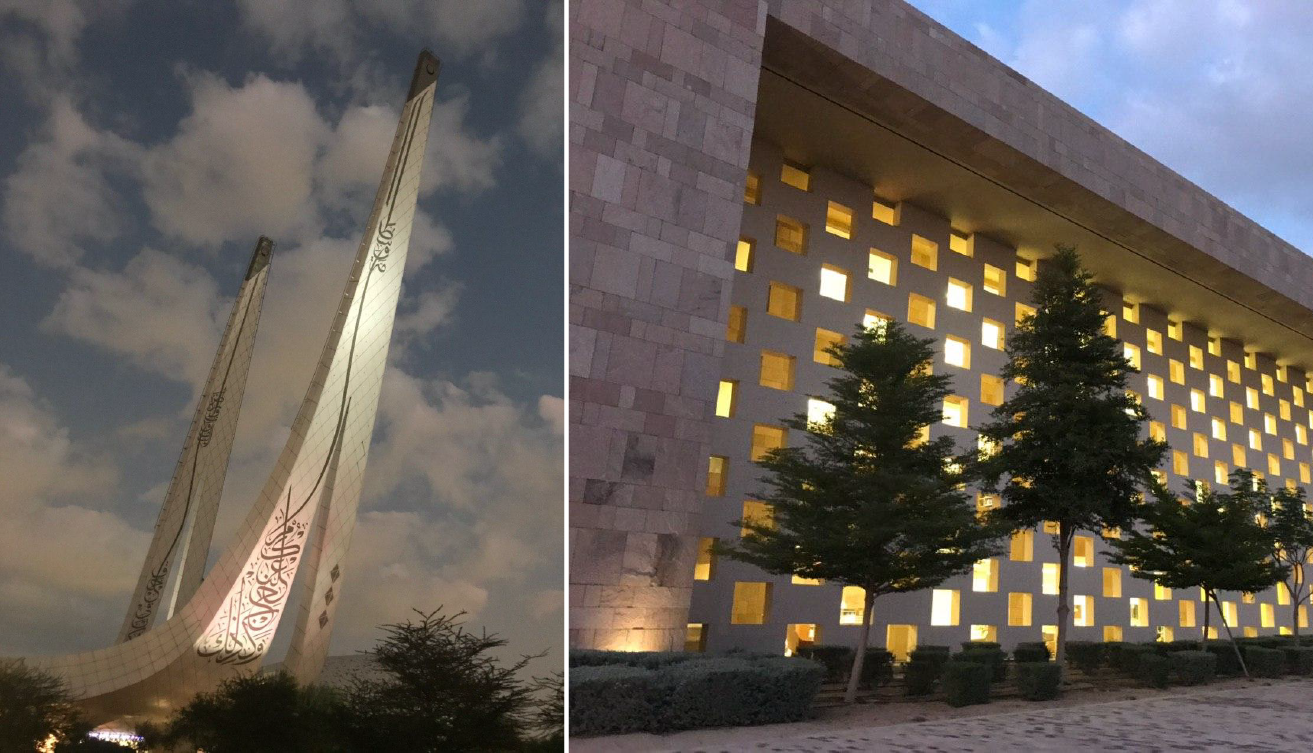 To visit another country and not try the entertainment of local residents is not about us.We went on a jeep in the desert, and even with a visit to the "Inland Sea". This is one of the few places where the sea deepens to the center of the desert and is recognized as a UNESCO World Heritage Site. 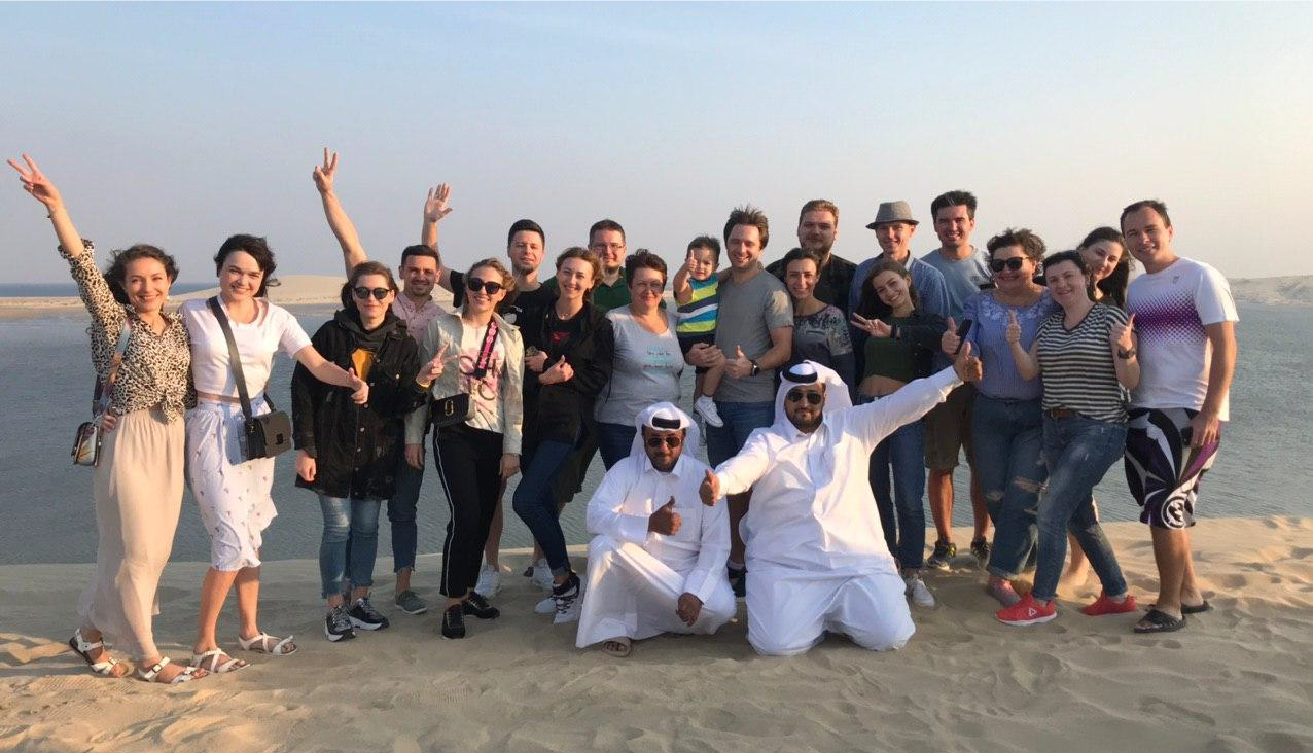 We decided to spend the last day on vacation at a more relaxed pace. We just basked in the sun, played beach volleyball and swam. 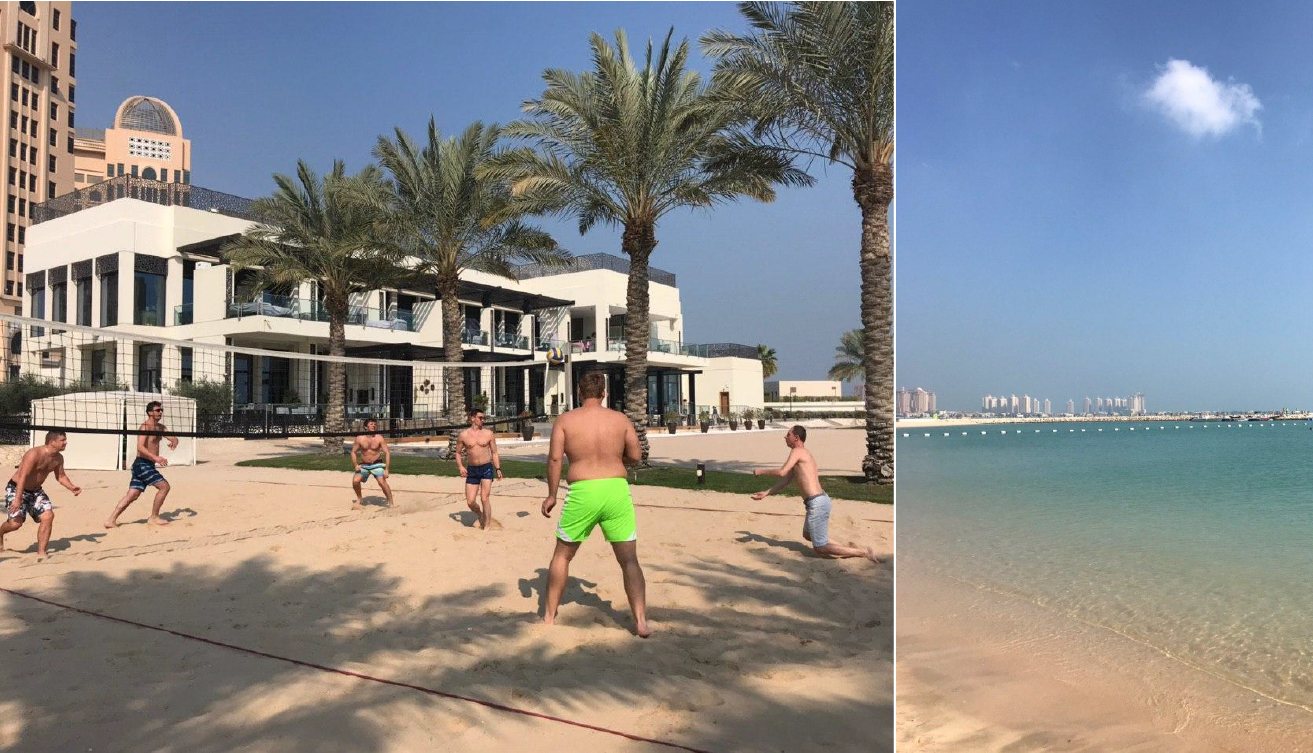 Only after lunch did we go to the last attraction of Doha (the last for us on this trip). And of course this is the Corniche promenade. To say “wow” is to say nothing. So many brand new skyscrapers of various shapes and number of storeys are amazing. 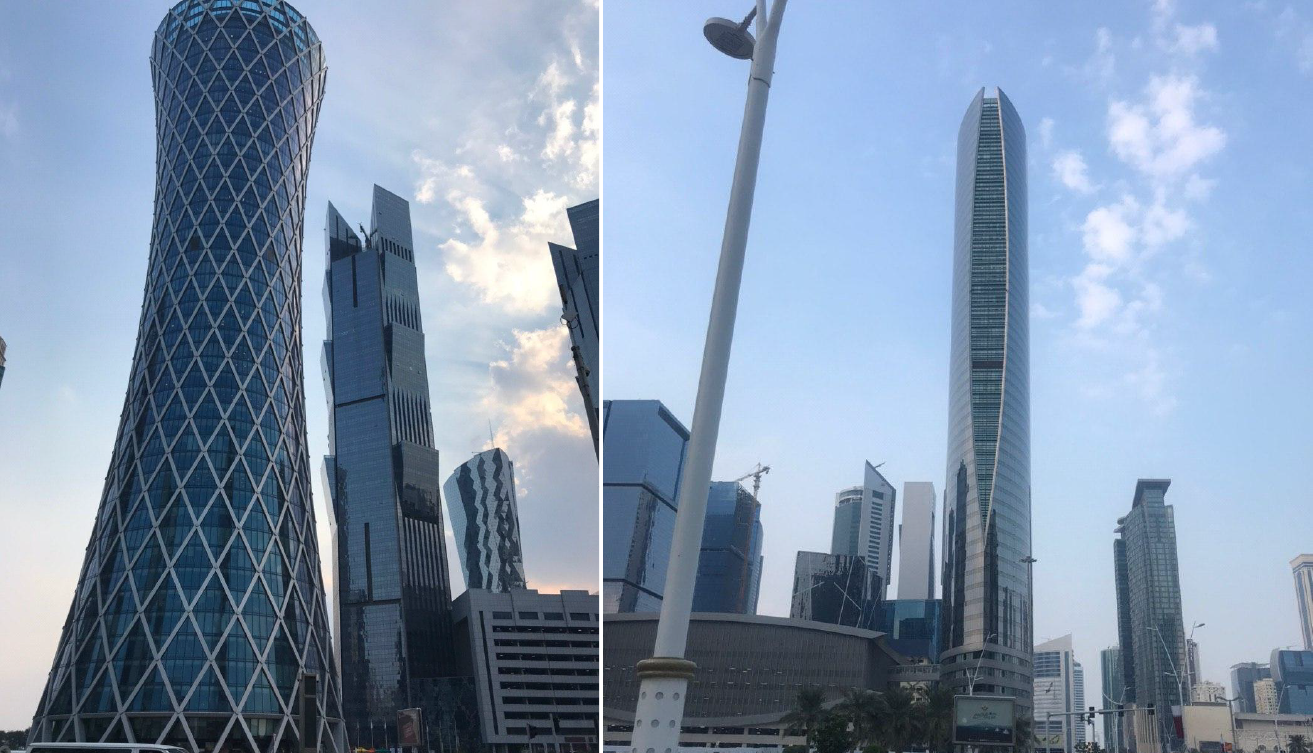 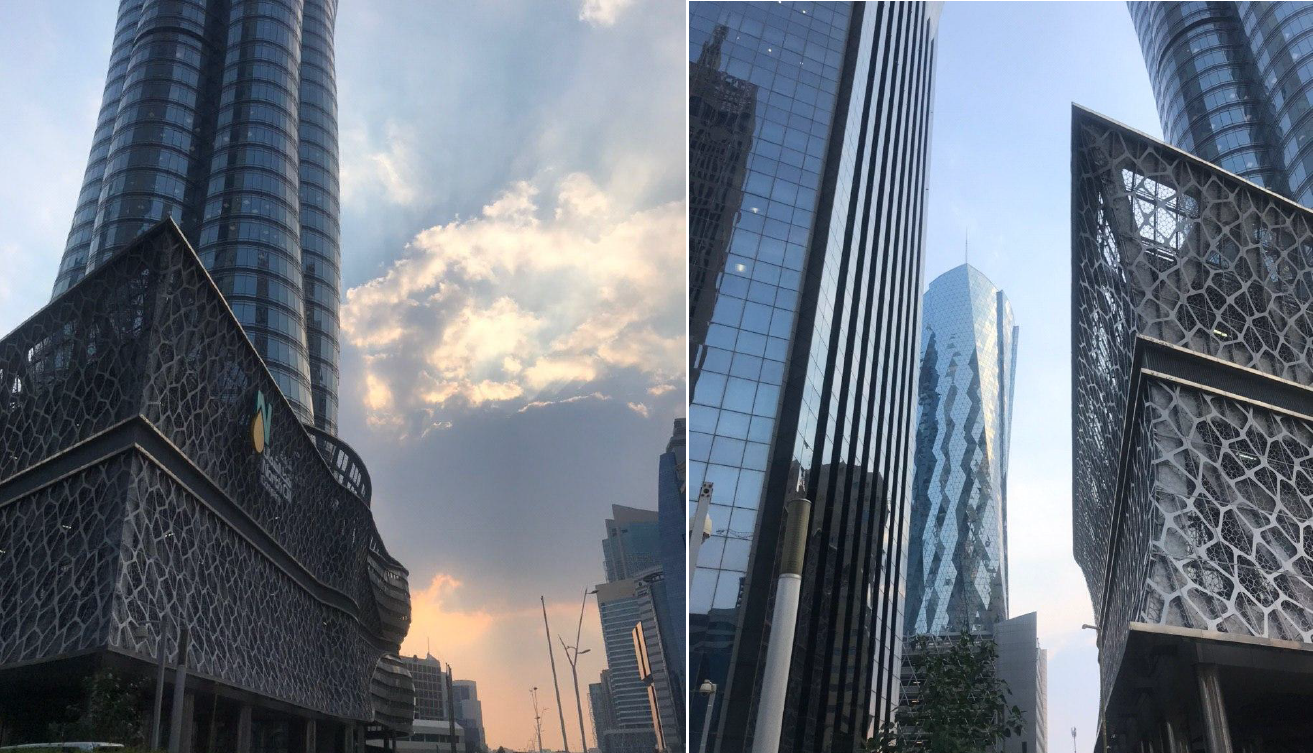 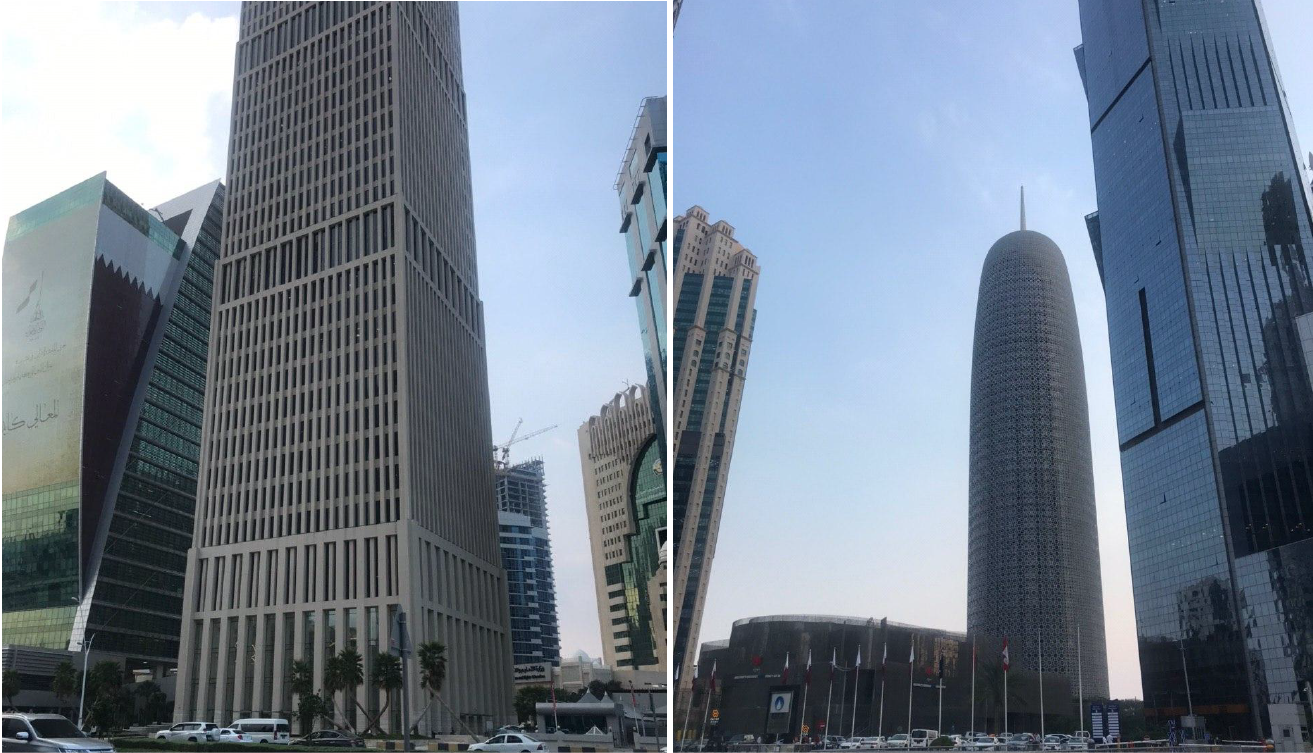 This vacation so charged us that we are ready to work, work and work many more times. Here we are very interested in what next country Sergey Yurets will choose for our joint vacation ?! After all, every year the countries are becoming only larger and more amazing.

The birthday Da Vinchi! We are 5 years old :)

Finally got our pens to write about how we celebrated the fifth anniversary of the company…. Of course, it had to happen on a large scale, in the richest country in the world, which affects their rapid development and incredible buildings. I’m sure many have thought about UAE, but no, we’ve been before. This time […]

Builder’s Day in the Carpathians!

Our incredibly cool corporate event in the Carpathians ended, which was timed to the day of the builder! Almost the entire team went to meet mountain landscapes, fresh air and extreme sports. Two days passed very quickly and actively, as they say: “After such a busy weekend, we need another weekend.” We managed to conquer […]

On July 13-14, Active House Days in Ukraine 2019 took place in Lviv. Of course, we could not pass by this event, so our architects visited it. The Sheptitsky Center was chosen as the venue for the event. And this is no coincidence, because this building is an excellent example of sustainable development architecture. Much […]

We could not miss our professional holiday. Therefore, by the decision of the best management, we conducted a corporate party with activities in nature. The venue was chosen by Hydropark, so that it was possible to fry kebabs, play beach volleyball, and also organize a kayaking tournament. The day came out very busy and interesting. […]

Another team building Davinchikov), as a child lives in each of us, it was decided to conduct a quest with fun and interesting tasks and games. The location for the corporate party was chosen by the Goloseevsky forest, near Lake Didorovka. On this day, good weather, fresh air and team spirit were conducive to a […]

BIM-dialogue in Lviv and Kharkov

Bakotech’s BIM Dialogue conference was held on April 5 in Lviv and May 17 in Kharkov. As part of these events, our company, as an expert, shared its experience in implementing BIM technologies. The speaker was our BIM manager Vitaliy Pravdich, who spoke about the first difficulties and methods for solving them, the advantages of […]

It is no secret that architects should always keep abreast, to know all the new products in the building materials market. Therefore, for us last week ended with a visit to Reynaers aluminum in Ukraine. Company representatives showed us a wide range of glazing solutions, talked about the innovations and the durability of their products. […]

Every year, in honor of the birthday of the company, we organize a trip abroad and this one was not an exception. We look forward to sharing our impressions of relaxation with you. This year a country was chosen with a long history, majestic mountains, many rivers, lakes, waterfalls and temples, with delicious cuisine and […]

“Da Vinchi Group” team had got a happy event !!! On October 25, 2018, the Royal Lancaster London hosted an award ceremony of the International Property Awards. The projects “Aura Apartment” and “Plaza”, in the development of which we took a part, won in the nominations “Residential High-rise Architecture Ukraine”, “Best Apartment Ukraine” and “Mixed-use […]

Corporate rafting on the Southern Bug

For our company, corporate vacation is a tradition. Thanks to the joint pastime, we always have a friendly and family atmosphere in the team, and we work smoothly, as a single mechanism. Last weekend, we organized a rafting tour to the Southern Bug, which runs through the territory of the natural park of national importance […]

On June 1, the Ukrainian Urban Awards contest was held in the Parkovy Exhibition and Convention Center, in which our team “Da Vinchi Group” took part. The jury consisted of such professionals as Tina Sobyu (Chinny, Chief Architect of Copenhagen), Markus Appenzeller (Head of Urbanism at the Academy of Architecture of Amsterdam), Michael Rojkind (Founder […]

What house to choose to buy an apartment?

At the moment, the real estate market is filled with many new buildings and a buyer faces the question “Which house to choose to buy an apartment?” Today, two technologies are actively used in construction: panel and monolithic-frame, so here are the main differences between them. The very first criterion in comparison will be “price” […]

From March 20 to March 23, the largest in Ukraine international construction exhibition Inter Build Expo 2018 was held in Kiev. The total area was 25,000 square meters, and more than 500 companies from 9 countries took a part in it. The exhibition has become a meeting place for leading construction professionals. Within the framework […]

This year this holiday was particularly interesting and informative. Almost all of us went on a trip!   Where were we? – In a state where the main task of an architect is to make it cooler, more beautiful, more modern, taller, more technological and absolutely no matter how much it costs, where marble pavements, […]

July 1, Ukraine celebrates the Day of Architecture, and we are no exception! This time we went on the Dnipro river by two sailing yachts. The journey began early in the morning from the yacht club Riviera in Osokorki. Along the way, we managed to compete for speed, practice managing the yacht, sunbathing, relaxing, fishing, […]

Da Vinchi Group on the air of Europa plus

Everything once again proves that the company “Da Vinchi Group” is able not only to work productively, but to have a friendly and fun holiday! The best option for corporate parties was LAZERTAG. The game became an excellent option for rest after the holiday and the beginning of the working week. The best option for […]

Friends, we have good news for you! We are glad to inform you that the customer of our Da Vinchi Group Design Organization opened a sales department of a new three-section business-class residential building “Henesi House” in St. Nagornaya, 18/16. “Henesi House” is made with an individual approach to the customer, avoiding typical solutions and […]

On November 3-24, 2016 in Kyiv, a seminar “CONSTRUCTION 2016/2017” was organized by the Business Club “Knowledge Management” on the topic: “CONSTRUCTION! Legislative and regulatory support. New procedures and rules 2016! New permits from A to Z” The seminar was attended by many construction organizations of Ukraine, and of course it could not be held […]